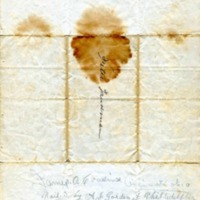 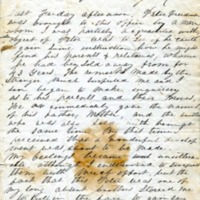 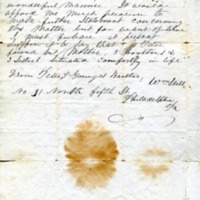 Last Friday afternoon, Peter Freedman was brought to this office by a man whom I was [partially] acquainted with,the object of Peter was to see if he could gain some instruction how he might find his parents & relatives, [whom] he had been sold away from for 43 years. The remarks made by the stranger much surprised me and I soon began to make [inquiry] as to his parents and their names, He an immediately gave the names of his father, mother, and the brother who was also sold with him at the same time. By this time I perceived that a wonderful development was about to be made. My feelings became unt unutterable, although I endeavored to [suppress] them with much effort, but the fact that this Peter was one of my long absent brothers stared me too full in the face to gainsay or dispute the evidence for one moment. Thus a brother whom


whom I had never before seen was introduced to me in this most wonderful manner. It would afford me much pleasure to make fuller statement concerning this matter but for want of time I must [forbear] at present Suffice it to say that Peter found his mother, 5 brothers & 3 sisters situated [comfortably] in life

William Still relates the story of Peter Freedman [Peter Still] coming to William Still's office in Philadelphia to learn how to locate relatives; notes the writer's realization and amazement that Peter was one of his "long absent brothers"; and states that Peter has thus located various family members: his mother, five brothers and three sisters. This item is labeled in ink as if addressed to "Peter Freedman," with an added notation in pencil regarding its transmittal to Cousins.