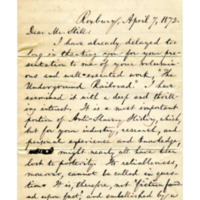 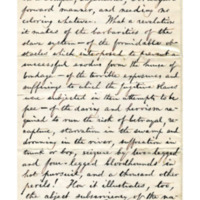 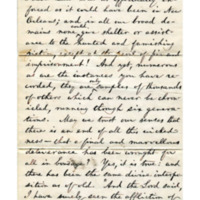 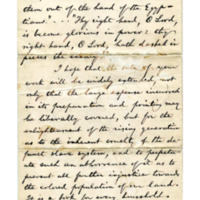 I have already delayed too long in thanking you for your presentation to me of your voluminous and well-executed work, “The Underground Railroad.” I have examined it with a deep and thrilling interest. It is a most important portion of Anti-Slavery History, which but for your industry, research, and personal experience and knowledge, might nearly all have been lost to posterity. Its reliableness, moreover, cannot be called in question. It is, therefore, not “fiction founded[?] upon fact,” and embellished by a lively imagination, but fact without a particle of fiction, and narrated

in a simple, ingenuous, straightforward manner, and needing no coloring whatever. What a revelation it makes of the barbarities of the slave system - of the formidable obstacles which interposed to prevent a successful exodus from the house of bondage - of the terrible exposures and sufferings to which the fugitive slaves were subjected in their attempts to be free - of the daring and heroism required to run the risk of betrayal, recapture, starvation in the swamp and drowning in the river, suffocation in trunk or box, seizure by two-legged and four-legged bloodhounds in hot pursuit, and a thousand other perils! How it illustrates, too, the object subservience of the nation to the Slave Power, so that even in Boston the atrocious Fugitive

Slave Law was as effectually enforced as it could have been in New Orleans; and in all our broad domains none could give shelter or assistance to the hunted and famishing victim, except at the peril of fire[?] and imprisonment! And yet, numerous as are the instances you have recorded, they are only samples of thousands of others which can never be chronicled, running through six generations. May we trust our senses that there is an end of all this wickedness -- that a final and marvelous deliverance has been wrought for all in bondage? Yes, it is true: and there has been the same divine interposition as of old. “And the Lord said, I have surely seen the affliction of my people which are in Egypt, and have heard their cry by reason of their

I hope that the sale of your work will be widely extended, not only that the large expense incurred in its preparation and printing may be liberally covered, but for the enlightenment of the rising generations to the inherent cruelty of the defunct slave system, and to perpetuate such an abhorrence of it as to prevent all further injustice towards the colored population of our land. It is a book for every household.

Yours, with best wishes,

William Lloyd Garrison thanks William Still for the gift of Still's book on the Underground Railroad; comments on the volume’s presentation and contents, including the perils encountered by escaping slaves and the impact of the Fugitive Slave Law; and expresses the hope that the book will be sold widely, both to recoup the expense of preparing it and “for the enlightenment of the rising generation as to the inherent cruelty of the defunct slave system.”