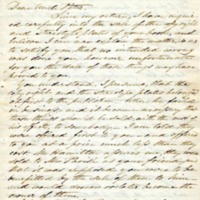 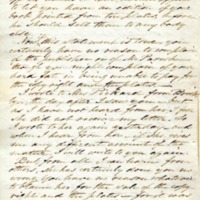 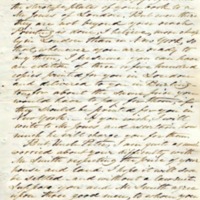 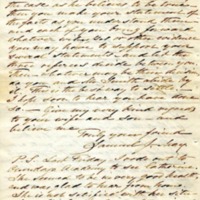 Since my return, I have inquired carefully into the sale of the [copyright] and stereotype plates of your book, and believe I can now explain the matter, so as to satisfy you, that no intended wrong was done you, however unfortunate for you the sale of those things may have proved to you.

You understand, I presume, that the [copyright] and the stereotype plates belonged at first to the publisher. When he failed in business, and it became necessary that those things should be sold, with the rest of his effects, to somebody, -- I am told they were offered first to you -- and offered to you at a price much less than they cost. Mr Hamilton assures me, they were sold to Mr Parish as your friend, and that it was supposed you were to be benefitted by the sale of them to him - and would sooner or later become the owner of them.

I hear that Mr Parish first offered them to you for what they cost him, i.e. $250.- and that when he found you

indisposed or unable to take them off his hands - that he then offered to let you have an edition of your book printed from the plates, before he should sell them to [anybody] else.

Now if this statement is true, you certainly have no reason to complain of the publisher or of Mr Parish -- though you might complain of your hard fate in being unable to pay for the [copyright] and the plates.-

I wrote to Mrs Pickard from Brooklyn, the day after I saw you, but as I have not heard from her, I fear she did not receive my letter. So I wrote to her again yesterday, and when I hear from her, if she gives me any different account of the matter, I will write to you again. But, from all I can learn from others, she has certainly done you no wrong. You have no reason whatever to blame her for the sale of the [copyright] and the plates, for it was a loss to herself to have them sold to [anybody] but yourself, or to some friend of yours for your benefit.

I have heard that after consulting you Mr Parish did sell the [copyright] and the stereotype plates of your book to a Mr Jones of London. But even there they are not beyond your reach. Printing is done, I believe, more cheaply in London than in New York, so that, whenever you are ready to buy them, I presume you can have an edition of three or five hundred copies printed for you in London and delivered to you in Burlington for about the same price you would have to pay for them, if they should be printed for you in New York. If you wish, I will write to Mr Jones and as certain how much he will charge you for them.

But, Uncle Peter, I am quite as much worried about your difficulty with Mr Smith respecting the price of your house and land. I hope it will soon be settled and without a lawsuit. Suppose you and Mr Smith agree upon three good men, to whom you will refer the whole matter, and let them decide how the difficulty shall be settled.


Let those three men come together at some convenient time and place then let Mr Smith state the facts of the case as he believes to be true, then you make your statement of the facts as you understand them, and each of you bring forward whatever witnesses or other evidence you may have to suppose your several statements and let the three referees decide between you. Then whatever may be their decision, do you and Mr Smith abide by it. This is the best way to settle.- I hope soon to hear you have done so.- Give my very kind regards to your wife and son, and believe me

⟨ P.S. Last Friday, I rode out to Onondaga Academy to see Catherine. She seemed to be in very good health, and was glad to hear from home. She is not satisfied with her situation, thinks she does not receive as much instruction as she ought to.- I think she will not stay there long.- ⟩

The Rev. Samuel J. May explains to Peter Still the circumstances, as he has been able to ascertain them, of the sale of the copyright and stereotype plates of Still's published narrative (after the bankruptcy of the publisher), which went first to Still’s friend Mr. Parrish and then to a Mr. Jones of London; indicates his resulting conclusion that Mrs. Pickard was not at fault for what happened to the plates, despite Still’s perception; presumes that printing in London is cheaper than in New York, so that for Still to purchase an edition of the book now would likely not be more expensive than formerly; provides advice regarding Still’s dispute with a Mr. Smith over the price of Still's house and land, suggesting that “three good men” be selected to act as arbitrators; and notes in a postscript that he recently visited Catharine [Still], who is unhappy with her situation at the Onondaga Academy, as she “thinks she does not receive as much instruction as she ought to.”