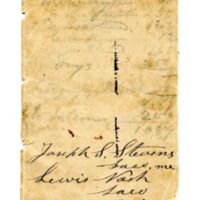 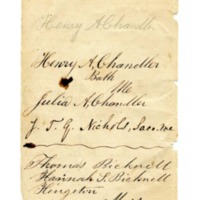 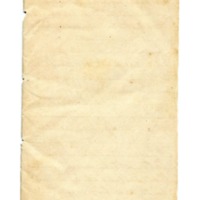 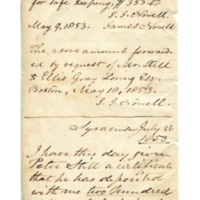 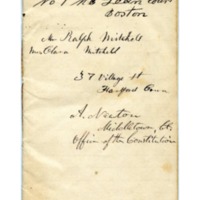 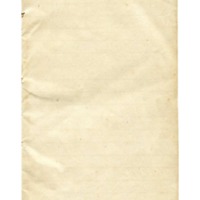 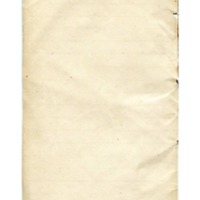 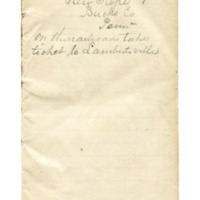 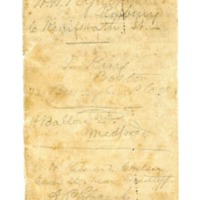 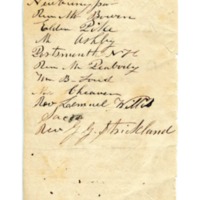 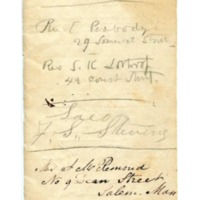 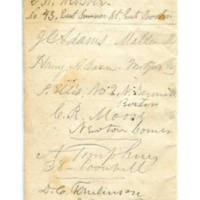 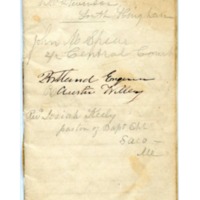 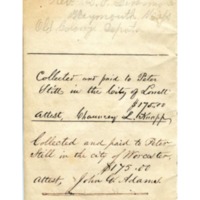 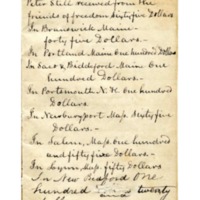 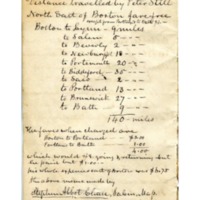 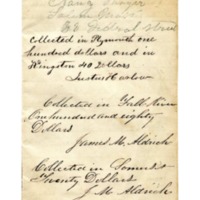 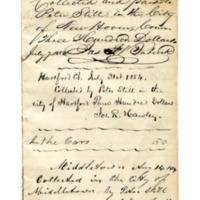 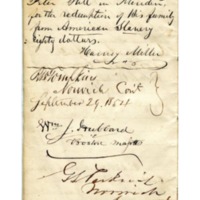 
Received from Peter Still for safe keeping, $355.00 S. J. Nowell. May 9, 1853. James Nowell. The above amount forwarded by request of Mr. Still to Ellis Gray Loring Esq. Boston, May 10, 1853. S. J. Nowell. Syracuse July 26 1853 I have this day given Peter Still a certificate that he has deposited with me two hundred dollars to be paid whenever he sends for the same Samuel J. May.


Distance travelled by Peter Still North East of Boston fare free except from Portland to Bath $1.- The fares when charged are which would $8. going & returning -but he paid but $1.00.- his whole [expenses] east of Boston was $6.75 the above memo made by Stephen Abbot Chase, Salem, Mass. at the request of Peter Still

Peter Still came to the city of Toronto Oct 13th 1854. Bearing letters of introduction from the Rev Samuel J. May of Syracuse N.Y. to the Rev Dr Willis, T. Henning[?] esq and the Rev J. B. Smith, who gave him a cordial reception, and manifested the deepest interest, and sympathy for him during his brief stay in Toronto. Mr Still stated to his friends here


that his object in visiting Canada was not for the purpose of asking aid or to make an effort to raise money from among the friends here but for the pleasure of treading upon the "free soil of this part of her Majesty's dominions" of which he had heard so much, and to see how his brethren (the fugitives from slavery) prospered. He is highly gratified with what he saw


and heard, and his entertainment generally. A few friends here, felt it to be a privilege, and a pleasure to present Mr Still with the small sum of $15. for which he expressed the deepest gratitude. Could he protract his stay a few days, many would have availed themselves of a like privilege & pleasure. Mr Still had the pleasure of visiting the colored Methodist Church on [?] Street the 15th inst A.M. and


then Pipers[?] (Baptist) in evening. He leaves our city tomorrow morning the 16th oct 8 o'clock. May success attend him. By request. J. B. Smith. Toronto. C.W.

Memo book kept by Peter Still (and written in by others) that: records sums of from 20 dollars to 1,055 dollars collected, in approximately 20 locations in New York, Maine, New Hampshire, Massachusetts, Rhode Island and Connecticut, toward the purchase of Still's enslaved wife and children; notes Still’s visit to Toronto (“for the pleasure of treading upon the ‘free Soil of this part of her Majesty’s Dominions’ of which he had heard so much; and to see how his brethren (the fugitives from Slavery) prospered”; lists the names and addresses of various people for Still to look up or whom he met; notes his limited expenses; and records three receipts for money that Still left on deposit with different persons. The memo book is stitched (bound without covers), with entries recorded from one end and, when flipped over, from the other end as well.