About the Still Papers 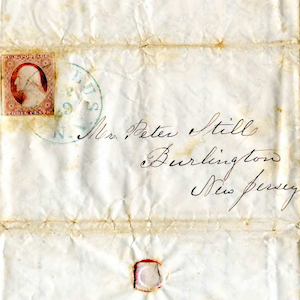 The Peter Still Papers (57 items) are chiefly composed of correspondence (1850-1875) relating to Still's efforts to raise funds to purchase his wife, Vina Still, and their three children, Peter, Levin, and Catharine, all held as slaves in Alabama. By 1850, the date of the first document in this collection, Peter Still had secured his own freedom at nearly 50 years of age with the help of Joseph and Isaac Friedman of Tuscumbia, Alabama. A secondary subject of the letters concerns Kate E. R. Pickard's work on a biography of Still, The Kidnapped and the Ransomed: The narrative of Peter and Vina Still after forty years of slavery, published in 1856.

The collection includes sixteen letters of introduction, secured by Still as a means of presenting himself to those sympathetic to the antislavery cause and to assist him in his fundraising. Letters from some prominent abolitionists are present, such as William Lloyd Garrison, Horace Greeley, and Harriet Beecher Stowe.

In addition, there is a memo book, in which Still had recorded his travel expenses, and the names and addresses of his donors together with the sums they contributed towards his mission. A family record, by an unknown hand, records the births of fourteen children to Levin and Charity Still from 1798 to 1821.1

About the Documentary Edition

The primary aim of this documentary edition is curatorial: we have sought to create accessible, reusable resources for students and scholars of American history. While our colleagues in the Rutgers Special Collections invested considerable effort to digitize and describe the Still Papers, and make them discoverable in RUcore, the Rutgers institutional repository, manuscripts remain difficult to read for all but the most practiced at archival research. With this edition, the metadata and the manuscript images from RUcore have been reused; they are enhanced by a reading edition of the texts, appearing in a transcription element in each item record. We have provided these transcriptions to support continued research and study of the collection by students, scholars, and the general public.

Being composed of documents that Still either received or held in his possession, the Still papers allow us to hear only one side of a conversation, punctuated by many gaps and omissions. None of Still’s replies are present. The bulk of the letters date to 1852-55, when Still traveled extensively to raise money to purchase his family, and when the work on Pickard’s biography of him was underway.

The default presentation of the letters is chronological; pressing the “Next Item” button at the bottom of each record will take the reader to the next document by date of creation. The documents may also be sorted by sender and recipient. At present, we have provided rudimentary subject/genre tagging. The statements of support solicited by Still from prominent abolitionists, as well as ordinary citizens, are tagged letter-of-introduction. The drafting, publishing, and selling of Pickard’s biography may be explored at pickard-book. And given that money is such a dominant preoccupation at all points in Still’s narrative, we have tagged letters that have to do with Still’s book-keeping, the haggling over the price of his wife and children, and subsequent money troubles when he and his family settled in Burlington, New Jersey as financial.

To situate ourselves as scholars, we possess expertise in the methods of digital editing, but no member of the project team is a historian by training, nor expert in the period in question. Despite fairly modest project aims, we nevertheless have had to make important decisions about how to represent these documents, and these decisions have ramifications for any scholar wishing to reuse our work. It is for these readers that we describe in the following section our editorial approach to the texts and the decisions made at the stages of transcription, encoding, and presentation.

The project team used the Text Encoding Initiative P5 Guidelines to develop a logical model for the documents in this collection. To keep a simple approach to our markup, we mainly drew our interventions from the TEI Lite schema, particularly those elements prescribed for structural features, simple editorial changes, and names and dates. In part because of the characteristics of the collection, e.g. very few surviving address leaves or envelopes with addresses, the model emphasizes the encoding of information about people, more so than places. We have used unique identifiers to identify many of the primary actors in Peter Still’s story, who are described more at length in a separate personography file. Places have been tagged, although no similar effort has been made to create a placeography or gazetteer, in part because it is difficult to be certain in some cases where senders and recipients were located. Figures like William Still and Kate E. R. Pickard reliably send correspondence from Philadelphia, Pennsylvania and Camillus, New York, respectively. By contrast, Peter Still, who is the recipient of the majority of the letters, traveled nearly constantly through the Northeastern United States and Canada, and many of his letters appear to have been hand-delivered. After being rejoined with his wife and three children in late 1854, Still was more regularly to be found with his family in Burlington, New Jersey.

Our intention with the markup has been to produce a rough idea of the aboutness of each letter, and not to count every reference to a person or a place. Consequently, the persName and placeName tags have been used selectively. For example, if Peter Still is mentioned five times in a letter, he is only tagged once. The same holds for repeated mentions of the same place in a document. Personal pronouns (e.g. he, she) have been tagged where an identification can, with confidence, be made. These textual references, as well as any variant spellings or adopted names, are linked by a unique identifier to their corresponding entry in the separate personograpy file. This has, in a few cases, necessitated a minor interpretive leap. For instance, we are fairly certain that Kitty was the nickname of Kitturah Still, a younger sister of Peter Still. Not every person mentioned in the text of these documents receives a unique identifier; in the personography file, we have made an attempt to include only those people who were significant in Peter Still’s world, namely family, friends, and people who helped or hindered him in his mission.

The online edition displays a reading edition of the texts where regularized spellings and expanded abbreviations have been preferred. Any regularized, expanded, or supplied text appears within square brackets to indicate an editorial intervention. Any text that was undecipherable or unclear has been rendered in italics followed by a question mark in brackets. However, the TEI-XML versions retain the possibility of a more diplomatic style of display, as can be seen within the choice tags of the following excerpt of Carter’s letter. 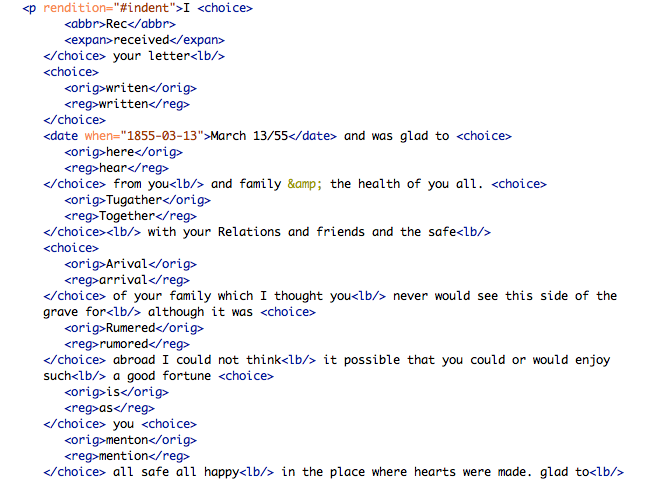 The data repository contains the TEI-XML encodings of all documents in the Peter Still Papers, as well as the XSL processing stylesheets. The Omeka theme used in the online edition is a lightly edited version of CHNM’s Center Row.

Omeka is, in many ways, not an obvious choice for the presentation of a TEI edition. There are currently no openly available plugins that facilitate the display of TEI, therefore we used our own XSLT stylesheet to transform the XML into HTML, which was then pasted into the transcription element of each item. For a small manuscript collection of 57 items, this was a feasible solution. Omeka does offer other advantages, namely fairly robust indexing, allowing readers to quickly search the documents by keywords, creators, dates, and subject and genre/form tags, among other things. The Omeka architecture also facilitates the display of manuscript images together with their associated metadata and transcriptions. Furthermore, Omeka’s mapping and exhibit plugins offer avenues of continued digital work on the collection, which is something the project team earnestly hopes to support, in both pedagogical and research contexts.

1 According to Pickard's narrative (259), Levin and Charity Still had a total of eighteen children; nine of them had died by the time Peter Still was reunited with his mother in 1850.↩