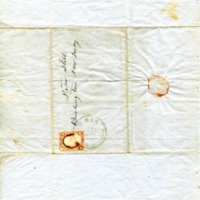 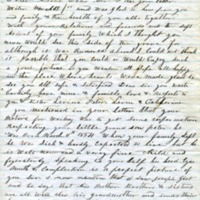 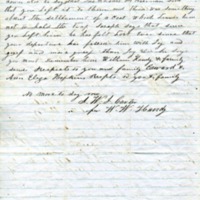 I [received] your letter [written] March 13/55 and was glad to [hear] from you and family & the health of you all. [Together] with your Relations and friends and the safe [arrival] of your family which I thought you never would see this side of the grave for although it was [rumored] abroad I could not think it possible that you could or would enjoy such a good fortune [as] you [mention] all safe all happy in the place where hearts were made. glad to see you all safe & satisfied Dear sir you [most cordially] have mine & [family's] love & Respects to you & sister Levina Peter Levin & Catherine you mentioned in your letter that your motive for writing was to get some information respecting your little grandson peter he was born March 11th 1854 when your family left he was sick & hardly Expected to live but he is well now and a very fine child and [figuratively] speaking is your Self his head Eyes mouth & [complexion] is a perfect picture of you Sir I now [mention] that I saw Joseph Gist and he says that his Mother Brothers & sisters are all well also his grandmother and sends their best Respects to you & family in Regard to the fish trap Joseph [does] not seem to hold it but

but says that it is unprofitable he says that he [examined] it and saw that one side was broken down also he says that Jno & Louis McKiernan said that you Left it to them and there was something about the settlement of a coat[?] which Leaves him not to hold the trap Joseph says that since you Left him he has felt Lost Ever since that your departure has filled him with Joy and [grief] and more [grief] than Joy also he says you must Remember him William Handy & family sends Respects to you and family Edward & Ann Eliza Hopkins [respects] to you & family

No more to say now

Carter, whose letter was postmarked at Tuscumbia, Alabama, acknowledges the receipt of Peter Still’s letter; relays his amazement that Still’s immediate family is free; sends greetings from himself and others; provides requested details concerning Still’s now healthy grandson Peter (born March 11, 1854); and reports on a fish trap that Still had owned.